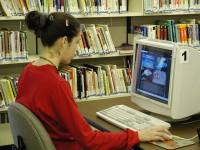 Six (6) new computer workstations (donated by the Bill and Melinda Gates Foundation) were available to customers. These stations provide such software products as MS Word, Excel, Publisher, PowerPoint and more.

Over 6530 customers visited the Library in an average week

1000 children registered for the Summer Reading Club and read over 10,000 books.

Over 1100 children register for the Summer Reading Club and read almost 12,000 books.

1200 people visit the library on an average day

In the spring of 2001, WPL’s new computer system, shared with Kitchener Public Library, was launched. The majority of the new computers are also connected to the Internet. 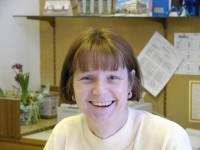 Chief Librarian Joanne Tate retires at the end of the year and is succeeded by Cathy Matyas (pictured left).

WPL is proud to participate in the 1st annual One Book, One Community reading program. The selected book is “No Great Mischief” by Alistair MacLeod.

The library offers free one-on-one assistance for those looking to create or improve a resume. 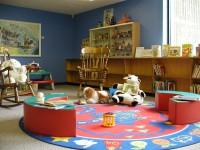 There is a major redesign and reorganization of the Main Library.

The Children’s Department receives the first treatment, with a cheerful new colour scheme, a revised layout plus new bookshelves and furniture to suit their smaller customers.

The library adds DVDs to its lending collections.

The /4teens section of the library’s website is launched.

The circulation desks are moved to a more central location, the Dupont Street lobby.

Staff and customers contribute recipes to create a fundraising cookbook titled “Literally Delicious”.  By the end of 2004, over 1000 copies had been sold.

The redesign project at the Main Library continues with the Adult Department drastically changing the layout, plus purchasing new book shelves to hold the thousands of wonderful new books which are arriving weekly.

In November, with support from the Optimist Club, a Toy Lending Library was officially opened at the McCormick Branch.

City Council approved a report from the library board to secure a site on Fischer-Hallman Road North in Waterloo to built a 21,000 sq ft. branch library.

The library received special funding from the Waterloo Regional Heritage Foundation to create and publish a book highlighting 150 people, historical and contemporary, who have made Waterloo the wonderful city it is. The book will be published to co-ordinate with the City of Waterloo turning 150 in 2007.

WPL was shortlisted for the Minister of Culture’s innovation award for its use of blogs to share information and to educate the community on new technologies. 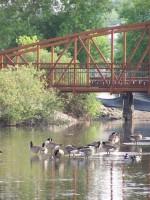 Over 1 million items are borrowed by library customers annually.

“Profiles of the Past, Faces of the Future” is published.  The book celebrates 150 local people, historical and contemporary, who helped shape our city.

WPL holds a photo contest for kids.  The winning photos, which are to depict what they love about Waterloo, were made into greeting cards which were sold in-house. 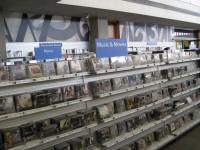 The redesign project was completed.

The Library was even busier than in 2007, with 1700 people visiting each day to use the various services offered by WPL, and to browse the 250,000 + items on the new shelves.

The WPL website, after 8 years, has been completely redesigned with input from the general public. The library has also joined Twitter @waterloolibrary

The system for checking out and in books changed over to RFID technology and self-serve checkout stations were installed at both the Main Library and the McCormick Branch. 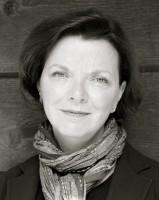 58,600 people have active memberships with WPL

Totem: Youth Ceramic Public Art Project 2010, was directed by a community artist mentor Mary Catherine Newcomb and the Canadian Clay & Glass Gallery’s Director of Education Sheila McMath. This project provided nominated high school students interested in the realm of public art the opportunity to construct a collaborative artwork. The artwork on display in the Main Library (from 2010 to 2015) was created incorporating a modular system of construction with many smaller units assembled into the larger totemic works.

October 22, 2011 – the John M. Harper District Branch Library opens at 500 Fischer-Hallman Road North in Waterloo.  This 21,000 sq. ft.  “green” building saw over 500 people line up to be one of the first to cross the threshhold.   In the first 3 hours of opening, almost 3000 items were checked out and 89 new members registered for library cards.   In the first 2 weeks, over 400 new memberships were registered.

Jyhling Lee, a former University of Waterloo architecture student, is awarded the public art commission for Waterloo’s newest branch library.   Lee, a regular library user since a very young age, created a sculpture entitled Origami Goose for the shared Library - YMCA facility. In her student years, Lee became familiar with the local wildlife and found the Canada Goose to be a distinctive image. Her golden sculptural origami goose “complements the architectural language of the folded planes and angled geometry of the new building” and is a “form within which one can move, walk around, walk through, sit under and simply interact with.”

165 volunteers work over 4,220 hours each year at WPL in a large variety of tasks. Thank you!

Programming for teens, adults and seniors is re-introduced at WPL.   Programs for children and tweens are as popular as ever.

WPL’s website has a new visual design specific for Smartphones.

2005 children registered for the Summer Reading Club for Kids.

WPL held its 1st annual Waterloo Reads! Battle of the Books at the McCormick Branch. The winner was Deputy Fire Chief, Richard Hepditch.

Over 1.8 million items were borrowed by WPL customers.

In February, a sock drive for the homeless was held. Customers donated over 350 pairs of socks.

In October, WPL’s McCormick Branch hosted a citizenship ceremony. This is the second time WPL has had this honour.

Over 900 customers replied to a survey and took part in focus groups, helping WPL to reimagine its logo and image. In June, the new WPL logo and brand were launched.

In February, the 2nd annual Toasty Toes Sock Drive for the Homeless was held. Over 700 pairs of socks were donated by customers.

STEAM heat! (formerly Transformation Station) was held at the Main Library with over 1000 people attending.  There were a variety of hands-on stations, demonstrations, live music and food trucks.

WPL held its 3rd annual Waterloo Reads! Battle of the Books at the Waterloo Memorial Rec Complex. 200 people attended. The winner was Wendy Tutt, co-owner of The Princess Cinemas.

WPL launched its redesigned website in August.  The library's first website was launched in June 2001, followed by a redesign in 2009. The latest site includes a custom-designed mobile site as well.

Waterloo Reads: the battle of the books was held in October during Ontario Public Library. The 2015 champion, Wendy Tutt, held onto her title, winning in 2016 by defending Plum Johnson's memoir, "They Left Us Everything". Over 200 people attended the debate.

In October, the 3rd annual After Hours @ The Library fundraiser was once again a huge success.  Attendees enjoyed delicious food provided by local restaurants, won amazing prizes donated by local business, and heard from 3 engaging guest speakers. To learn more, visit After Hours @ the Library.

We held our annual Toasty Toes Sock Drive for the Homeless. With the help of local students and businesses, over 2000 pairs of socks were donated.  The socks are distributed by St. John's Kitchen to those in need in our community.

In January, Chatelaine Magazine named WPL's John M. Harper Branch to its list of "The 15 Coolest Libraries in Canada."

Over 61,000 members borrowed over 1.5 million items this year. We have over 7000 new adult members and almost 1500 new children's memberships.

1528 free programs and events were held for customers, with 42,525 attending. Over 2000 children participated in the annual Summer Reading Club for Kids.

The 4th annual After Hours @ The Library event raised over $8500 for technology-related items for adult and children's programs.

138 volunteers dedicated over 4300 hours to helping, teaching and inspiring at WPL.

Over 1.5 million items were borrowed by WPL customers this year

50,500 people attended our free programs throughout the year

2300 children registered for our annual Summer Reading Club for Kids

Custom “book benches” were donated to the Main Library by Frank and Dolores (Dorscht) Steffler in memory of their parents, Leander and Rose (Dietrich) Steffler and John and Mary Ann (Mahlman) Dorscht. The benches, made from concrete and beautifully sculpted to look like open books, arrived at the Main Library in early summer and were embraced enthusiastically by staff and customers alike.

Over 62,200 people have active memberships at WPL.

1.4 millions visits (in person and virtual) are made to the library over the course of a year.

Our 233 volunteers worked over 4800 hours, helping in a large variety of ways at all locations.

Due to the COVID-19 crisis, all WPL locations shutdown starting in mid-March.

Starting in April, WPL began offering fun, innovation and education virtual programs for all ages which were incredibly popular with customers.

From July 2 to Labour Day weekend, curbside, contactless service was offered at the Main Library and the John M. Harper Branch.

Customer were allowed back inside the library, wearing masks and following social distancing protocols September through December, when the province went back into lockdown and a state of emergency was declared.

In November, construction of the Eastside Branch at RIM Park begins. The branch is scheduled to open in spring 2022.

The COVID crisis continues, with WPL starting the year off offering curbside service along with virtual programs and events for all ages. Curbside service will continue until July 3, 2021 when customers will once again be able to enter the library and browse the collection.

Construction continues on the Eastside Branch at RIM Park, Waterloo.